A presentation of the catalogue “Unbuilt. Visions for a New Society 1986 – 1994” will be held tomorrow, May 22nd at 6PM at the Museum of Estonian Architecture, Tallinn. 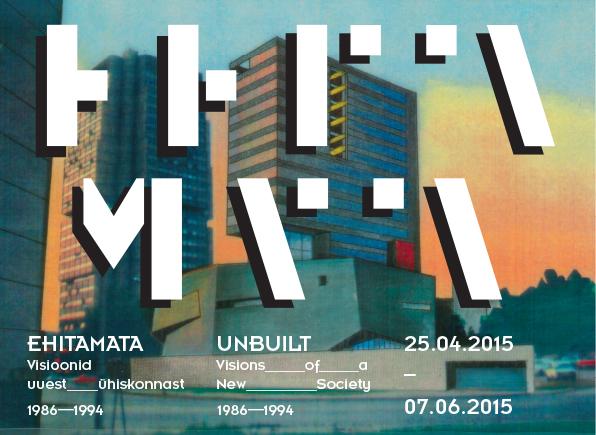 “The crisis consists precisely in the fact that the old is dying and the new cannot be born; in this interregnum a great variety of morbid symptoms appear.” This much-repeated quote by Antonio Gramsci describes very well the period starting in 1986, when Mikhail Gorbachev declared perestroika at the 27th Congress of the CPSU, and lasting until 1994, when the last Soviet troops left Estonia – a time, which when speaking about Estonian society, politics, and economy, we are accustomed to calling the “transitional period”. Nevertheless, not all that much attention has been turned so far in art or architectural history to the intermediary period as a phenomenon in itself. Still, in architecture as a field more strongly tied to socio-economic conditions, there are phenomena and qualities that specifically reflect this condition of interregnum. The transition from one social formation to another was not clear-cut but rather manifests rather as a fluid and hazy process – forms and practices characteristic of late Soviet postmodernism may exist side by side with approaches that were affirmed in built architecture only towards the late 1990s.

One of the reasons why this intermediate period in architecture has, for the most part, not been perceived as a phenomenon in and of itself is undoubtedly the fact that the majority of architectural works from the time have remained merely on paper. The exhibition “Unbuilt. Visions for a New Society 1986 – 1994” is the first attempt at mapping out Estonia’s transition-era architectural scene: what kind of spatial solutions were offered for building up a society completely based on new principles? Was the radical openness characteristic of interregnum echoed in the unbuilt architectural projects? What was the position of the architect in the changes taking place? Can critical stances be found in transition-era architecture, or does it just give shape to the concurrent liberal and conservative yearnings that broke out with the changes? In any case, the architectural visions of the transition era strongly influenced later ideals, positions, and goals. Today, as our society and its spatial manifestations has become somewhat self-evident while deserving criticism as well, it is time to have a look at the beginnings.

The exhibition Unbuilt. Visions for a New Society 1986 – 1994 runs at the Museum of Estonian Architecture until June 7th, 2015. Curated by Ingrid Ruudi, exhibition design by Karli Luik, graphic design by Margus Tamm.