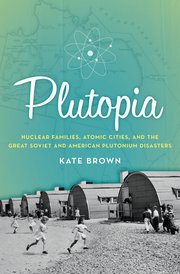 In this richly researched book, Brown explores the common origins and trajectories of an American city–Richland, Washington–and its Soviet counterpart–Ozersk, Cheliabinsk oblast–and their residents’ lives over the span of the Cold War’s nuclear age and up to the present. Both cities were at the forefront of their countries’ nuclear weapons programs, as well as the secrecy and social engineering that the race to produce plutonium engendered. The two cities’ role in the Cold War and the security regimes built around them set Richland and Ozersk apart from “normal” American and Soviet cities. Yet, as Brown argues, the underlying dynamics that bound residents to their governments through these cities captured in stark relief a broader condition of Cold War urban life on both sides of the Iron Curtain: a willingness to give up one’s civil, political, and even “biological rights” in exchange for the security, exclusiveness, and consumer abundance that both cities provided.

Such an exchange is a familiar story to many students of Soviet history who have long argued that coercion and terror alone cannot explain what bound this state and society together through wars and revolutions. Vera Dunham’s classic argument about a “Big Deal” that bound the Soviet intelligentsia to the Stalinist regime through the exchange of loyalty and quiescence for a better standard of living is a major example. As scholars have shown more recently, the “Big Deal” only got bigger and wider when Khrushchev’s and Brezhnev’s regimes extended the good life to ordinary citizens through mass housing and mass consumption. To be sure, scholars have also shown how such developments intersected with the Cold War as both adversaries sought to compete in non-military spheres, even dragging the housewife and her kitchen into the fray. What sets Brown’s book apart from these studies is her ability to reconnect the heart of the Cold War’s military conflict–plutonium and nuclear weapons production–to the social and urban landscapes the conflict created, as well as the very real costs in human life and health it exacted on Soviet and American civilians, who we normally think survived the Cold War unscathed. In short, as sites of Cold War competition, these cities were not set apart from the military calculus of the conflict; they were the very urban expression of that military calculus and the complex industrial, scientific, and carceral apparatus it required to function successfully.

As an examination of urban history, Plutopia thus sheds much light on questions critical to the Second World Urbanity project. First, Brown reveals the visions and foundations of a particular kind of Soviet city–the closed atomic city–which scholars are only beginning to research against the backdrop of more familiar Soviet urban landscapes from Moscow to Magnitogorsk. Second, far from concluding that such a city was a uniquely Soviet or socialist phenomenon, Brown explores the shared origins and commonalities that bound Ozersk to its American counterpart. In short, the book highlights a fundamental debate–the degrees to which cities in the Soviet Union and the broader Second World were distinctly socialist and the degrees to which they merely represented variations on their counterparts across the Iron Curtain. Brown’s answer is that nuclear weapons production (and now clean-up) situated American and Soviet plutopias in the same place, somewhere in-between the capitalist and communist utopias their countries attempted to create.

To continue our discussion of Plutopia, we have invited Asif Siddiqi (Fordham University) and Anna Veronika Wendland (Herder Institute for Historical Research on East Central Europe, and Justus Liebig University) to share their insights and questions about this book. Readers are welcome to submit comments and questions to the author, as well as the two reviewers on the posts that follow below.

Kate Brown is an Associate Professor of History at UMBC.  She is the author of Plutopia: Nuclear Families in Atomic Cities and the Great Soviet and American Plutonium Disasters (Oxford 2013), which won the George Perkins Marsh Prize from the American Society for Environmental History.  Brown’s A Biography of No Place: From Ethnic Borderland to Soviet Heartland (Harvard 2004) was awarded the American Historical Association’s George Louis Beer Prize for the Best Book in International European History.  Brown’s most recent book Being There: The Misadventures of Writing History, about the difficulties of trying to record the lost histories of modernist wastelands, will be published by the University of Chicago in 2015.

Asif Siddiqi is a historian of science and technology who specializes in modern Russian and Soviet history. He is a professor of history at Fordham University in New York. He has published widely on the history of the Soviet space program. His most recent works include The Red Rockets’ Glare: Spaceflight and the Soviet Imagination, 1857–1957 (Cambridge University Press, 2010) and Into the Cosmos: Space Exploration and Soviet Culture (University of Pittsburgh Press, 2011). His interests include the production and regulation of knowledge in the Russian context. In that vein, he is currently working on two projects, one on the Soviet intelligentsia’s role in enabling the Gulag economy (under contract with Oxford University Press), and the other on a history of secrecy in Russia.

Anna Veronika Wendland is interim deputy director at the Herder Institute of Central and Eastern European Studies in Marburg and lecturer at the Justus Liebig University. She is a specialist in Eastern European History, with a focus on the transnational history of Eastern European nationalism, on urban history, on the history of spatial imaginaries and cartography, and on science and technology studies. She published her first book on the Ukrainian Russophile movement in Austrian Galicia and is completing her second, “Urbanity in the Age of Extremes. Lviv and Vilnius 1890-1970”. Her current research focuses on the history (and visual history) of nuclear energy and nuclear city planning in Eastern Europe from the 1960ies to the present, with comparative sidesteps to Germany and France. The book project  “Atomogrady. Nuclear cities between Utopia and Disaster in Russia, Ukraine, and Lithuania 1965-2011” is her contribution to the Second World Urbanity project.