We’re pleased to introduce our discussion of Tarik Cyril Amar’s book, The Paradox of Ukrainian Lviv: A Borderland City between Stalinists, Nazis and Nationalists (Cornell University Press, 2015) that has triggered a lively historiographical debate since its publication in 2015. Based on extensive archival research, The Paradox of Ukrainian Lviv, traces the major local and transnational forces–including war, Sovietization, and industrialization–that reshaped the borderland, multi-ethnic city of Lviv (also known as Lwow and Lemberg) into a modern Soviet and Ukrainian industrial city in the course of the turbulent epoch between 1939 and 196 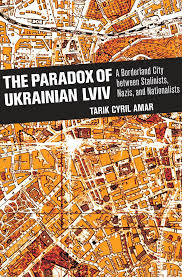 2. This discussion seeks to question how unique the history of forging urban modernity in Lviv was. Is its destiny comparable to other cities in contested territories? And if yes, what makes Lviv’s story distinct from other places across the Second World if anything at all? One of the aims of the SWU project is to reflect on the methodological approaches we use for our studies on socialist and post-socialist urbanity. Amar’s work reveals the interplay and tensions between the forces of homogenization in the name of building Socialism and the forces striving for regional distinctiveness. In other words, constructing modern Lviv went hand in hand with embracing and reshaping the notion of the “local”. How can we translate this insight into our studies of Second World Urbanity and how does it challenge our understanding of the Second World’s projects of modernization? These are just a few questions that The Paradox of Ukrainian Lviv poses for our field.  Christian Hess (Sophia University, Tokyo), Tom Williams (University of Angers), and Elidor Mëhilli (Hunter College, New York City) will conduct the present discussion of Amar’s book. Readers are invited to submit comments to any of the posts in this discussion.