Holidays after the Fall: Seaside Architecture and Urbanism in Bulgaria and Croatia explores the transition from socialist modernism in the 1950s, 1960s and 1970s to recent “boom and bust” tourism development in capitalist Bulgaria and Croatia. The “remarkable [socialist] showcases of modern architecture and equally state-of the-art urban concepts” (30) are not the standardized, grey architecture high rises of the capitalist imagination, but a diverse range of creative forms ranging from hotel towers, to Bulgarian low-rise hotels modeled on traditional monasteries, to the terraced village-like complexes of the Adriatic. Post-socialist tourism, in contrast, has meant speculative property development, corrupt politics and zoning, and profound environmental degradation. The contributors to this edited volume are attentive to the physical restructuring of resorts and hotels over the period, and to economic and political changes including “revised models of mass tourism and the passage of ownership, investment and management into the hands of the respective countries’ new elites.” (32). The first half of the book explores the history and post-socialist restructuring of Bulgaria, the second Croatia. The subtleties and specificities of socialist and post-socialist holiday spaces are revealed in the comparison (if often implicit rather than explicit) between these two countries, which share a socialist past and a capitalist present, but a different future in that Croatia’s natural resources are still largely intact. Holidays after the Fall is appropriately and usefully interdisciplinary with contributions from specialists in urban planning, architecture, history, and German and Dutch studies. In addition to lavishly illustrated chapters—one of the deep pleasures of this volume are the magnificent images—the volume is bookended by color photographs of Croatian hotel architecture in the 1970s and Bulgarian coast resorts in 2012, the later as photographed by Nikola Mihov.

Throughout the volume, the contributors purposefully elude distinctions between East and West, bringing the holiday architecture of Bulgaria and Croatia not only into dialogue with tourist hotels and reports in the south of France, for example, but into general agreement. “Modernism” is key here, as is made especially clear in an excellent introductory chapter by Michael Zinganel and Elke Beyer on “Architectures of modern global longing:” “Whether in the aspiring young democracies of Central America or under the fascist dictatorships of Franco in Spain and Salazar in Portugal, whether in Greece after its civil war or in Gaullist France, in state socialist countries, such as Bulgaria, Romania and Hungary, or in the Crimea or in non-aligned Yugoslavia, new resorts were vital components of the more generally centrally planned and state-funded modernization programs.”(42) It wasn’t only central planning that made these spaces modern. The longing for the seaside itself is said to be modern, as is the experience of mobility needed to get there. So too, is tourist architecture in which the “borders between ‘classical high’ and ‘popular low’ culture have become increasingly permeable.” (36) According to Zinganel and Beyer, the parallels between seaside architecture in socialist and capitalist countries are such that we might reconsider whether “the state control of tourism development was a specifically socialist ambition or a sign of a more general modern, Fordist trend.”(53)

The focus on hotels, with their foreign visitors, makes it easier to emphasize the modern and the international than it would be for those writing on other topics. The modernism of these spaces reflects, as Elke Beyer and Anke Hagemann describe in their chapter on the making of Bulgaria’s Black Sea Coast into a tourist destination, their function as international showcases in a cold war competition over culture, as well as their pragmatic role as for-profit money makers aimed at international tourists. By the early 1970s, approximately 2.5 million foreign tourists, hard-currency in hand, visited Bulgarian resorts (if most of them from socialist countries and only 15% from Western Europe). A 1956 Bulgarian promotional film emphasized the distinctly non-socialist mood of “carefree consumerism” available in these resorts with their nightclubs and casinos. I suspect that if the volume had said more about vacation homes, trade union facilities, and holiday places for youth (as is the case in just one of the many “case studies” about specific holiday destinations: the holiday house of the Trade Union of Minors), distinctions between East and West might have been more notable (even as some of these spaces were also built in reference to an international modernist style). A focus of this kind would have made a comparison across the 1989 divide more complex, as more of these uniquely socialist spaces appear to have fallen into disrepair. But it is here, where the regime was not aiming at an international audience, that we also might see even more of the purposeful, educative, and communal aims of socialist tourism in play.

This is not to say that “socialism” is missing from the modernist architecture and urban planning of the postwar period. Yugoslav tourism, as Michael Zinganel discusses in his chapter on the “democratization and commodification” of seaside tourism in Croatia, was meant to develop and demonstrate socialist consciousness, as well as socialist brotherhood in Yugoslavia’s “muti-ethnic federation of nations.”(163). Maroje Mrduljaš, in a chapter on tourism development on the Croatian Adriatic under state socialism, emphasizes spacial planning and governance based on the socialist goal of the “common interest.” (176). Importantly and almost uniquely in this volume, Mrduljaš gives us a sense of debates amongst architects about tourist architecture and planning. Grgo Gamulin, an influential art critic, offered, for example, a socialist critique of mass tourism emphasizing instead the educative function of an engaged and enlightened tourism architecture.

Most of the authors appear nostalgic, or at the very least deeply respectful, of socialist urban planning and architectural strategies. Elke Beyer and Anke Hagemann admire the “quality of [Bulgarian] holiday resort architectures of the late 1960s and early 1970s,” an architecture that was “remarkable” and “deservedly acclaimed by internal experts.” (87) Mrduljaš and others emphasize the advantages of centralized tourist planning based on the common interest. This admiration is understandable when socialist holiday construction is compared to the “construction megalomania,” political and economic corruption, and environmental degradation of many holiday developments following the political upheavals of the 1990s and lasting into the present. In an impressive work of investigative journalism, Nobert Mappes-Niediek reveals the chaotic, postwar history of privatization on the Adriatic Coast in the volume’s final chapter.

As Mrduljaš explains, however, these expressly “socialist” aspirations appear to have been relatively short lived, the regime and its architects increasingly turning to an architecture aimed at making money, especially foreign currency from foreign visitors. Indeed, the “socialist” specificity of many of these holiday spaces remains fuzzy. I wonder, as Juliana Maxim asks so cogently in a previous review in this forum, if modernism has become “our new de-facto operational category, the largest matryoshka of architectural history, able to accommodate within its roomy contours everything that was built in the 20th century’s second half, regardless of geographical or political context?”

It may be easier to conjoin socialism and modernism, and to elude some of the more troubling aspects of socialism, by focusing on tourism and, even more so, on architecture. Tourism was fundamentally a consumer item and architecture was one of the principle sites of permitted transnational transmission and conversation. Socialist states insisted that socialist modernity was better than capitalist mass consumption, but striving to meet “world standards” of modernity in the 1960s meant high-rise blocks and clear, geometric lines, as well as casinos and “hedonistic theme parks” such as the Internacional-klub in Poreč with its “Disco Club,” “Club la Belle Epoque,” and “Eros Club.” (205) Postwar tourism—be it international travel by individuals or the transnational circulation of technology, architecture, and the aesthetics of modernity—was increasingly difficult to disassociate from the economics, aesthetics, and culture of capitalism.

I do not mean to suggest that modernity is not socialist, nor attention to beauty, pleasure, and leisure. Far from it. Scholars have argued that the growing gap between rising consumer expectations and a persistent lack of consumer provisions was a major reason for the failure of East European state socialism. But it is also precisely because so many experiences that were branded as decadent by Stalinist-era regimes were “normalized” and made “socialist” during the various Thaws of the late 1950s and 1960s, that Soviet-style socialism endured for so long. Mary Neuberger, in an essay on touristic escapes and “places to party” in Bulgaria in the recent edited volume Socialist Escapes: Breaking Away from Ideology and Everyday Routine in Eastern Europe, 1945-1989, emphasizes the “remarkable flexibility of socialist states” to respond to the consumerist demands of their citizens, often with products, places, and experiences described as “socialist” but heavily influenced by Western models. (147) 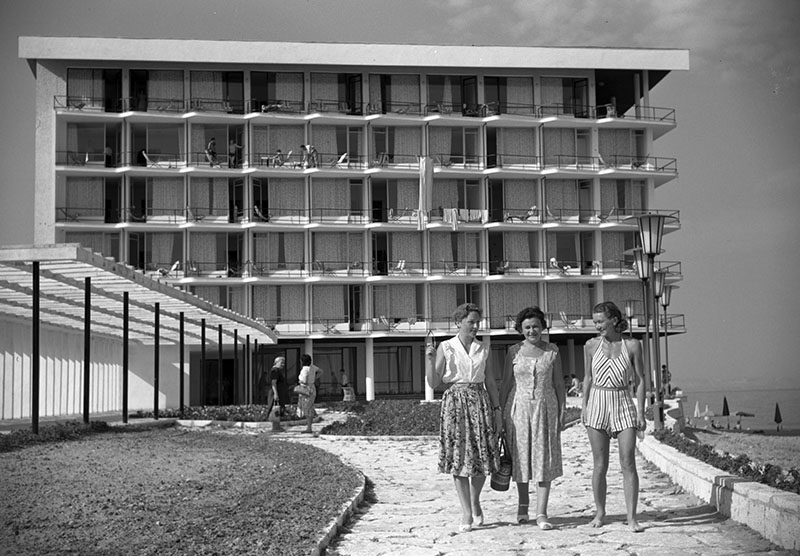 That said, while ideologically defensible efforts to enable pleasure, individualism, and socialist escape were meant to suggest to citizens, as Neuberger puts it, that “ripe communism” (147) was just around the corner, in many east European regimes by the later half of the 1970s and the 1980s these efforts were no longer enough. To this end, it would have been interesting to learn more in Holidays after the Fall, about dissatisfactions with provisions offered in the modernist hotels and resorts of Bulgaria and the Croatian coast. I also would have liked to see more on the interaction between architecture and people, although this is a curiosity that I admit may be unfair as I come to this book not as a specialist in architecture, but as an historian interested in the socialist tourist experience. How did people—be they local or foreign—use and experience the Hotel Marjan in Split on the Adriatic in the 1960s? What was it like to take a holiday at the Golden Sands hotel on the Bulgarian Black Sea Coast in 2012? Relatedly, more might have been made of the images themselves, which right now serve primarily as illustration of the textual arguments. Many of the images of modernist architecture are devoid of human beings, an absence worth considering. Who were the producers and intended consumers of these timeless and politically empty images? What advertising function were they meant to serve? Those with people are also rich with information about ideals—if of a different kind—namely about clothing, hair styles, body posture, gender, sexuality, and generation.

I hope that my questions make obvious how deeply engaging, intelligent, provocative, and wonderfully wide-ranging Holidays after the Fall is. This book will be of interest to those curious about the architectural transformation of holiday facilities in these two specific regions, but also those interested more generally in urban design, architecture, modernity, socialism, and all of their transnational contexts, in the second world.

Anne Gorsuch is Professor of History at the University of British Columbia. Her research focuses on the cultural history of the Soviet Union. Her major book projects to date include Youth in Revolutionary Russia: Enthusiasts, Bohemians, and Delinquents (Indiana, 2000) and All This Is Your World: Soviet Tourism at Home and Abroad after Stalin (Oxford, 2011). She is also the co-editor of two volumes (with Diane Koenker): Turizm: The Russian and East European Tourist under Capitalism and Socialism (Cornell, 2006) and The Socialist Sixties: Crossing Borders in the Second World (Indiana, 2013). She is currently working on two new, related projects. One is a book on the history of the Soviet Sixties. The other is a cultural history of the relationship between the Soviet Union and Cuba in the 1960s.