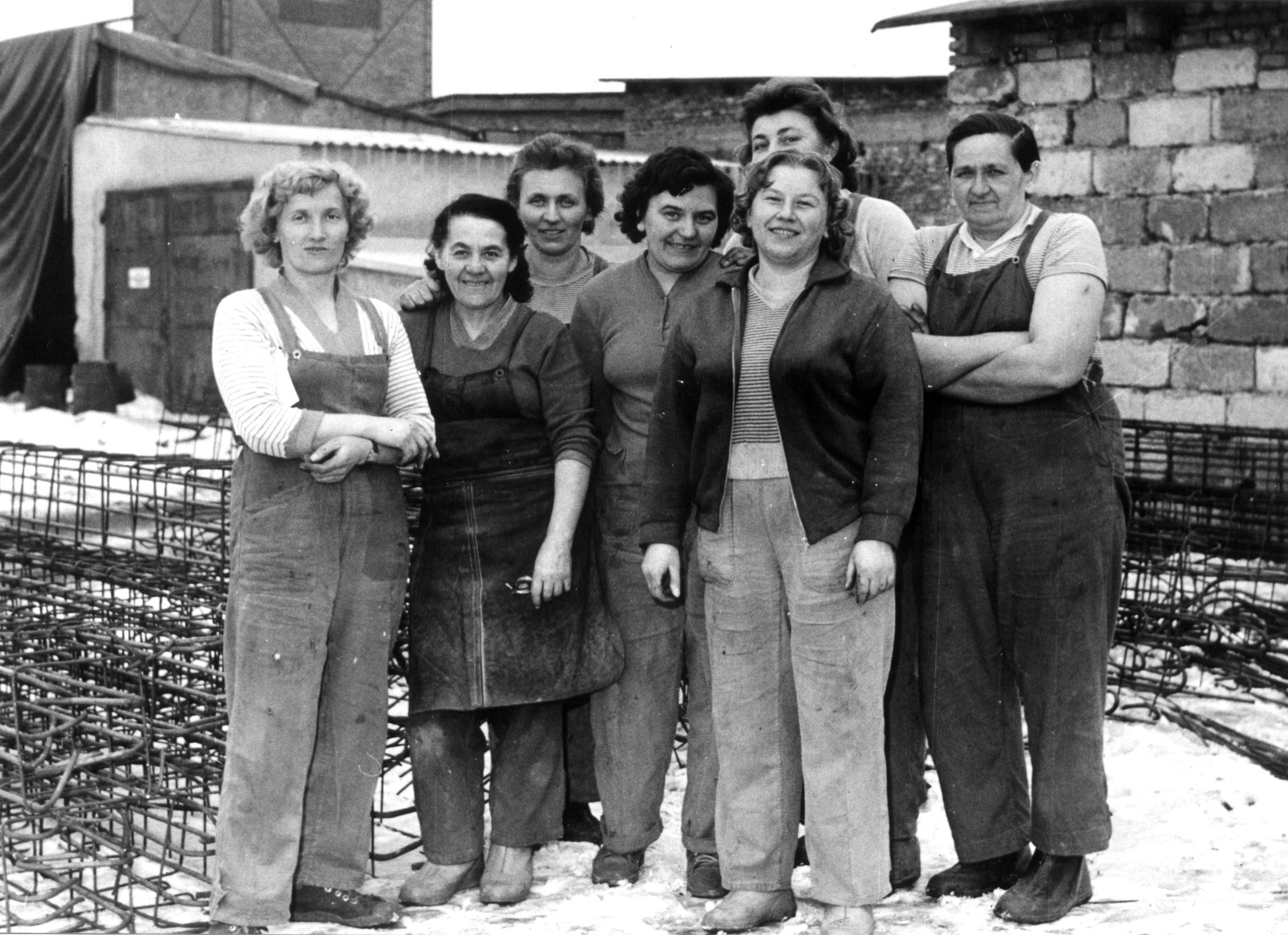 Unfinished Utopia, Katherine Lebow’s meditation on the meaning and emergence of Nowa Huta as both an idea and a place, is a welcome addition to the growing literature on the postwar socialist city. Working primarily with memoirs, oral history, and previously untouched archival material, Kate draws out the story of Nowa Huta’s founding through the narratives of individual witnesses whose understandings of the city’s history inform a very personal, and at the same time, sweeping commentary on the role of the city in postwar Poland. Unlike books such as mine that take a consciously unemotional and institution-based approach to the study of the postwar city, Kate’s view of Nowa Huta is presented as a collective memory, tested and refined through the remnants left behind in archives and stories, but fundamentally a sensory and atmospheric record of a place that was so contingent on its historical moment.

State socialist regimes made many promises that ultimately could not be fulfilled. Kate’s title, “unfinished utopia,” could apply to many aspects of the ‘socialist project.’ The not uncommon lament that European socialism was a good idea gone very wrong is certainly embedded in this optimistic phrasing which posits a history of something unfinished, rather than something ill-conceived, malicious, or corrupt. On these grounds, just the title itself could inspire quite a debate and so this is the first question to Kate – why use the term “unfinished?” Why not false, failed, incomplete,…?

Nowa Huta was conceived as a vision of the beautiful socialist future, not a utopia in the sense of something so perfect as to be impossible. Our present-day inability to take socialist realism seriously on its own terms is something that the late architectural historian of Russia, Catherine Cooke, wrote about very passionately in the article, “Beauty as a Route to ‘the Radiant Future’: Responses of Soviet Architecture” (1997). She reminded us that the style required demanding educational and professional standards and often stood the test of time unlike the avant-garde buildings that are much more beloved. Kate’s descriptions of the wide avenues, the Venetian-inspired administrative buildings and the urban monuments fit with this analysis and the aspiration of the ‘radiant future,’ however incomplete the town was relative to the initial master plan or how the newer districts were made with prefab blocks in later years. Once the family housing was finally built, many residents liked this environment and to this day old Nowa Huta is a welcome change from crumbling villages and monotonous prefab districts. So not only is there a question about the idea of unfinished, but also the use of the term “utopia.”

Had Nowa Huta been built according to the original plans, would it have been a utopia? On page 30, Kate writes that “the architects were increasingly fighting a losing battle with cost cutting, which forced many of their visions into the filing cabinet.” Most often socialist realism is criticized precisely for its visions – its kitschy historicism, its fake surface decoration, its simplistic notions of luxury, and its artificial theoretical basis. Here the implication is things would have been so much better if the architects were just allowed to realize their plans with enough money and manpower to built the city properly. The more recent blossoming of New Urbanism, especially in the United States, brings up similar anxiety for architects – is it alright for people to want something nostalgic or kitschy because it matches their cultural expectations? Nowa Huta was unfinished, but I think it was also a very real product of the system, a socialist vision of the future that would be achieved through collective work and struggle. This sounds very naïve and strange in 2014, but the memories of the first residents certainly reinforce the specialness of the place to them at that time and the camaraderie of the struggle – with mud, with bureaucrats, with privacy, and everything else.

I want to focus my second set of questions to Kate on her arguments about the nature of Stalinist control and the knowledge and experiences gained by subverting it, out of necessity or will. As I read, I couldn’t help but think of two other projects that bracket my personal understanding of Nowa Huta – Magnitogorsk and Nová Ostrava (Poruba). Stephen Kotkin’s 1997 book on Magnitogorsk, Magnetic Mountain, is a classic and anyone working on the history of communist industrial cities feels the burden of its ambition and achievement. It has also made the story of the creation of a steel mill out of nothing into a Communist trope, no longer unexpected or jarring, but a sign of the outsized ambitions of the Stalinist heavy industry program.

In thinking about what life was like in Nowa Huta at the start, one passage from Kotkin kept returning to me: “‘The colorful journalist Semen Nariniani disembarked from the train, looked around, turned to the station man, and asked, ‘Is it far to the city?’ ‘Two years,’ the man answered.” (106) This profound and humorous exchange about Magnitogorsk encapsulates so much about the situation and would have been equally apt at a certain moment in Nowa Huta. But just as the comparison seems useful, the far away location of Magnitogorsk and its inability to transition into a typical city (as happened to a large degree in Nowa Huta), is a reminder that these stories are not the same. One only has to read Steeltown, U.S.S.R. (1991) to appreciate the profound gulf between the lower middle-class existence of most people in Communist East Central Europe and the brutality of the peripheral areas of the Soviet Union. New residents of Nowa Huta arrived to Kraków, not the Ural Mountains. Even if the residents had trouble getting to Kraków for the first few years, its proximity meant that the city existed as an outlet for their stress about the project and its progress. Within just a few years, Nowa Huta even became part of Kraków, so the hardships faded within a generation.

Kate does not compare Nowa Huta to Magnitogorsk directly, but the Soviet story lurks in this 1950s version of the same tale. For me, the comparison is necessary to consider the degrees of difficulties that the early residents had to suffer through. The argument is that this early period gave the city a unique sense of identity and surefootedness that would be asserted in the Solidarity period. Although this is an early history of the city, it also attempts to be a pre-history or prequel to the Solidarity movement in the sense that according to her many of the same impulses were acted out first in this new town.

Nová Ostrava, or what became know as Poruba, is the second reference that is necessary here. If Magnitogorsk is an extreme version of Nowa Huta that has penetrated the consciousness of many scholars, Poruba is the lesser known Czech twin to Nowa Huta, not too far away and built at almost the exact same moment. The challenge I would make to the argument about how the creation of Nowa Huta set the stage for Solidarity is that Poruba followed almost the same course from 1951 to 1980, but with very different results. Nová Ostrava was planned as a complete replacement for the historic city of Ostrava, but politicians balked at this radical move and instead scaled down the proposal and it became a residential district within the city, housing about 35% of its population. The story is similar – first there were barracks, then apartments surrounded by mud, constructed in a grand socialist realist style by brigades of workers recruited to participate in the ‘building of socialism.’ The residents were mostly young people with children from outside of the region attracted by its economic opportunities and promises of a new start. Rural Czech and Slovak migrants, Hungarians, Roma, and even Greek refugees from the Greek civil war were among the first residents. Vietnamese and African workers came in later waves. A strong local identity developed around the hardships of the early years and the pride in industrial work. In Ostrava this was not only about making steel, but also about coal mining. One difference is that Poruba did not become a center of political agitation.

I question whether this history of Stalinist town building can be linked so strongly to the 1980s. If this was the case, we would expect to see something similar to be happening in Poruba, but its residents largely supported the economic system and therefore the regime. Certainly not enthusiastically (who could in the 1980s?), but the residents of this Stalinist neighborhood owed their middle-class lifestyle to the system and they were not going to be the first ones to try and undermine it. I have much more to say about this, but will leave my comments here for now and say more as the discussion evolves.

Kimberly Elman Zarecor is Associate Professor of Architecture and Director of the Bachelor of Design Program in the College of Design at Iowa State University where she teaches courses in architectural history and design. She holds a M.Arch (1999) and Ph.D. (2008) from the Graduate School of Architecture, Planning, and Preservation at Columbia University. Her research examines the cultural and technological history of architecture and urbanism in the former Czechoslovakia. She is the author of Manufacturing a Socialist Modernity: Housing in Czechoslovakia, 1945-1960 (University of Pittsburgh Press, 2011), which will appear in Czech translation later this year with Academia Press. Her work has also appeared in Architektúra & urbanizmus, East European Politics and Society, and Home Cultures, as well as a number of edited volumes and conference proceedings. She is currently working on a new project about the architectural and urban planning history of Ostrava, an industrial city in northeast of the Czech Republic near the border with Polish Silesia.