First of all, many thanks to both Virág and Juliana for their generous and thoughtful reviews, as well as to Steve and Daria for their invitation and for making this discussion possible.  There are a growing number of excellent scholarly studies that tackle the built environments of the Second World, and we are honored that Modernism In-Between is the first to be discussed here. 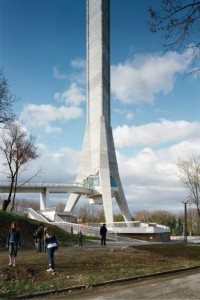 Let us start by addressing Virág’s remark about the book’s last image with people playing bocce: it is indeed a widely favored photo and it is very different from all others.  It shows how everyday life unfolds in a space that offers its inhabitants a chance of identification and belonging, thus poignantly conveying one of the central messages of the book: that the stereotype of inhumane and uninhabitable socialist cities is not necessarily universal. Photos like that one, however, are a lucky coincidence and are typically difficult to capture, not because humane spaces were rare in socialist Yugoslavia, but because spontaneous human activity—as Wolfgang will testify—often fails to translate into meaningful images. His photographs, usually devoid of people or cars, aim at presenting buildings and spaces as valuable architecture and imparting them with a certain timeless quality, rather than documenting a very precise historical moment.

Wolfgang would like to contribute to this discussion by adding a couple of images that are different from those included in the book, featuring people in a meaningful way: tourist in front of the reconstructed TV Tower at Mt. Avala, hinting at the building’s status as a beloved symbol of Belgrade, or a waiter at the top floor of the former headquarters of the League of Communists of Yugoslavia, characteristic of the change of the architectural program from the ideological heart of the country into a prestigious commercial building. 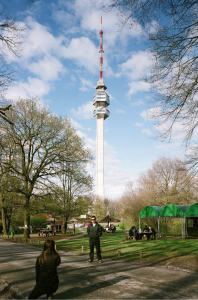 Juliana is right to suggest that our claim to “Yugoslav exceptionalism” is not fully intended.  Such a claim often emerges as a point of contention in the discussions with colleagues who specialize on other East European countries, perhaps as a symptom of what the late Slovenian art historian Igor Zabel called the “easternization” of Yugoslavia, i.e. a recent historiographic tendency to push the country back to the Soviet bloc, from which it broke away in 1948. We refrained from getting into the discussion of exceptionalism not only because it tends to be fraught with ideological, identitarian, and sometimes even nationalistic burdens, but also because there is little basis at the moment for making serious claims in that direction.

There is no doubt that Yugoslavia was an exception in geopolitical and economic terms; but establishing to what degree it was an architectural exception requires a historiographic shift towards a mapping of East European architecture along at least some shared criteria.  If our book is a manifesto for anything, it is perhaps most emphatically a manifesto for the uneasy unity of historical specificity and a comprehensive perspective in architectural history that would allow for a minimum level of meaningful comparative perspective.  Even in its most politically cohesive moments, the Soviet bloc was never completely cohesive architecturally, not to mention the much looser and diverse entities as Eastern Europe or the Second World.  At certain moments and in certain degrees, the architectural culture in Yugoslavia indeed belonged to Eastern Europe, but it also belonged—often simultaneously and in similarly varied degrees—to other culturally and ideologically tinted terms, such as Central Europe, the Balkans, the West, and even Africa and the Middle East.  Such an increasingly global perspective is a shared experience for the whole Cold War world and it is precisely in the particular mix of global connections that we may look for one of the aspects according to which architectural cultures acquired their specificity. 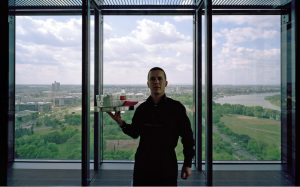 Fig. 3: View from the top floor of the former Building of Social and Political Organizations in New Belgrade (also known as the Central Committee of the League of Communists of Yugoslavia). Mika Janković and Dušan Milenković, architects. 1959-63. © Wolfgang Thaler

The plea for simultaneous specificity and comprehensiveness perhaps underlies the hybrid character of our book, which is one part a photographic monograph, one part a thematic survey. Even in a heavily edited selection as ours, an abundance of images is essential for gaining at least a cursory “feel” for a body of architecture, which otherwise remains a pure abstraction.

Conversely, images by themselves are insufficient and require contextualization; relying on purely visual criteria seductively leads to otherwise unfounded conclusions, a problem that plagues some of the “recent spate of photographic extravaganzas about former communist lands,” as Juliana puts it.   Through a typology of in-between conditions, we tried to provide theoretical shortcuts towards a meaningful broad discussion of a large and diverse body of architecture, well before thorough research has been completed at every smaller scale.  Such methodology, of course, bears the danger of coming to crude or false conclusions and, were we to rewrite the book today, it would probably greatly gain in complexity.  But if we inspire someone to revise or even refute our theses, that will in itself make our efforts worthwhile.

Let us, finally, address Virág’s question about the downsides of the in-between condition.  It is perhaps fair to say that Yugoslavia paid the ultimate price for its in-betweenness through its collapse.  It is true that the three fundamental in-between conditions that defined socialist Yugoslavia—the particular forms of socialism and federalism and the non-aligned foreign policy—were all conceived as positive statements of emancipatory politics. But in the perpetual negotiations of the practical meanings of those terms, these statements never got entirely liberated from their “brackets,” or the poles of the scale on which they were positioned in-between. It is no wonder, then, that they were never meaningfully translated into the field of architecture.  For example, the vast body of work by Yugoslav architects around Africa and Asia in the 1970s went mostly unnoticed by the official architectural culture, relegated to a parallel world of large construction companies. Rather than closely scrutinizing the very real problem of how to address the questions of identity and tradition in distant locales, architects at that time obsessed about importing the postmodernist discourse rather uncritically from the West. Such blind spots were numerous, ultimately precluding the country’s in-betweenness “in itself” to be articulated into an architecture “for itself.”